Wheel of the Year: Neopagan invention or basic observation?

Wheel of the Year: Neopagan invention or basic observation?

The Wheel of the Year is a well known neopagan concept that spans several types of modern pagan traditions (Wicca, branches of Druidry, Atheopaganism, Sacred Feminine, etc.). Beginning on "the Witches New Year", Halloween, the Wheel of the Year goes like this:
Samhain, Yule, Imbolc, Ostara, Beltane, Litha, Lammas, Mabon... or something like that. That is how I recall them. You could also call them Halloween, Christmas, Valentines Day, Easter, May Day, Fourth of July, Last Days of Summer, and Back to School if you instead follow the Walmart of the Year. And you can find plenty of online or book resources for this concept. I'm leaving it loose, because the point of this post is to span beyond this "Wheel of the Year" as eight specific celebration Sabbaths to be celebrated at all costs by all pagans. The Wheel of the Year was invented in fairly recent times during the pagan-religious revival times of the mid-1900s. Though the names were taken from several traditions and slapped together, it is undeniable that these eight specific times coincide with correlations between the three important and obvious celestial cycles.
Any child can identify these unique cycles. We learn very quickly, by living with them, how the environmental conditions of each impact us. For instance, when I say "Yule" or "Christmas" or "Winter Solstice" or "Hanukkah" you know I am referring to that specific set of holidays that take place in the winter, when the days are darker and colder. If I say "Easter" or "Ostara", any child in the culture will identify this with church or a bunny, but any child in the northern hemisphere will associate this celebration with "spring time".

The Wheel of the Year was not invented, it is plainly visible for all to recognize as it is written in the patterns of nature!* I think there is no reason to believe people have freely observed these cycles, throughout all cultures and geographies throughout time.

*I write from a northern hemisphere perspective and at a latitude that does not get complete darkness during winter. A fairly wide band.
**The degree is 23.5 now, but the degree slightly varies every 24,000 years from 24.5 to 22 degrees. This is one of the Milankovitch Cycles, I could write about this another time but has plenty of reference out there, or see my Violent Earth Lecture 4 on the subject.


The Year
The Sun and Constellations on the Ecliptic

Ill start with this one, because it is both the most well known (sun) and poorly known (stars) and happens to be my favorite!

So, you will recall from your Geography 101 that the earth is tilted on her axis (23.5 degrees)**. As she revolves around the sun but the angle stays the same, this naturally sets up a variation in the amount of solar radiation each part of the globe receives: a minimum, a maximum, and a point between each. The Winter Solstice is defined by the suns lowest point in the sky or the furthest south it rises or sets, so coincides with the shortest day of the year (or most darkness). The Summer Solstice the sun is very high in the sky, but easier to measure by looking at the furthest north sunrise.

The Equinox days are pretty simple, as the sun rises directly on east on both days.This is pretty easy to measure if you have access to a high point to clearly see the western, southern, and eastern horizons that you can return to weekly in the morning, noon, and night. I say its easy, but time consuming! I did this from my east facing window for sunrise for a year. Anyway, they patter of the moving sun is pretty clear. 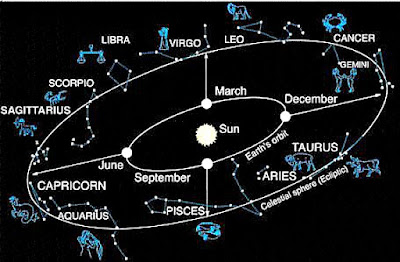 Okay, not the poorly known part: the Stars! The thirteen constellations on the ecliptic (suns path through the sky if plotted during the year) are known as the Zodiac. Zo- for animals, dia- for days. The annual path of the sun is divided into the animal shapes the stars are in. Doesn't matter what they are, you can make up your own shapes and animals if you like. Or just take the star names. Anyway, there are certain stars and constellations that also mark these. Not quite as precise, but mark the time. I will use the astronomical constellations, since they are the most well known (and only ones I know, hehe). These can also be easily observed if you stand on that same hill requested above. Though, some of these alignments along the horizons and at sunrise/sunset will not be accurate for higher or lower attitudes. 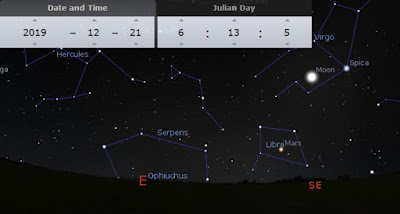 2. Winter Solstice - Virgo constellation is rising before the sun. If you wake up while it is still dark, which is common for most of us at that time in the winter, and you look to the south eastern sky, the brightest star is Spica of Virgo (note the moos is also full in my stellarium picture). As a side note, isnt it interesting that the Sun (son) rises (births) under the Virgo (virgin) on the Solstice (Christmas)? Literally written in the stars. 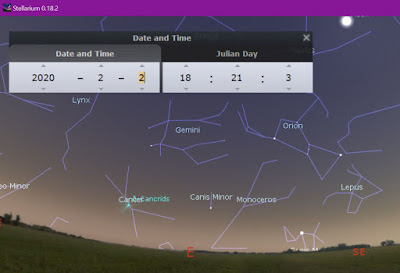 3. Imbolc - Sirius is visible on the eastern horizon right at sunset.
Few days earlier, sun rise is too early and Sirius is too low. Few days later, and Sirius is high in the sky by the time the sun goes down. This is approximate. Not precise, but more a 'season' feeling.

4. Spring Equinox - The position of Sirius, once again, helps to determine the days around the Equinox (aside from the Sun rising/setting E/W and the length of day/nigh the same...). Sirius, the brightest star besides the sun, crosses directly south at sunset on the days surrounding the Equinox. Couple days before, it is far to the east at sunset. And a few days after, it is in the west of south during sunset. 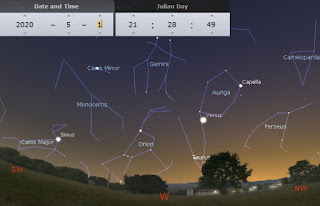 5. Beltane - Just as Imbolc marked the rise of Sirius and Orion, Beltane is marked as the last days of those stars. The last days of April, Sirius can be seem skimming the horizon. Then all of the sudden, the belt and Sirius not out after sunset. Gone. Beltane.

6. Litha - During sunset of midsummer, if you look near the spot where the sun had stood at 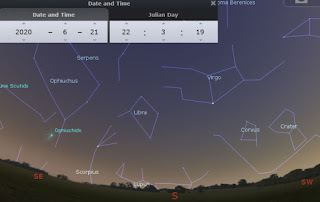 solar noon, you will see the Virgin. Almost right on south. Actually, where the sun was is between her legs now. 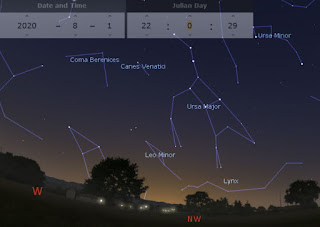 7. Lammas - At this special time, when the days are still warm and long and you can get plenty of stargazing while camping, there a couple of cool ways you can tell August is coming: The obscure way is to use the north star (Polaris). If you already know how to find Polaris, you are familiar with the pointer stars of the Big Dipper. At the onset of August, peculiarly the pointer stars and Polaris line up with the western azimuth (intersect the horizon right at west).
On the eastern horizon, our good friend Orion begins to be visible in the morning just before sun rise. 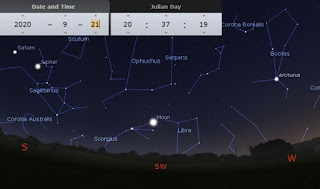 8. Mabon/Autumnal Equinox - one of my personal favorites, can be detected as the last days of the constellation Scorpius. All summer, the Scorpius and its heart star Antares provides a great summer spectacle. But at the same time the nights are becoming cool, crisp, and dew in the morning the Scorpius constellation is lower and lower on the southwestern horizon until, on the days surrounding the Equinox, the Scorpius cannot be seen on the horizon after sunset.

The Seasons
The Growing Cycle
Many pagans are gardeners, but far from all. The cycle of agriculture is a popular cycle in all of the mythology of ancient polytheistic religions and modern neopagan ones, so it is surprising to me that not all pagans make a point to be involved in agriculture (or at permaculture) in some way.

The traditional Wheel of the Year is heavily influenced by Celtic reconstruction of the 1970s, which was from most of what we can tell was heavily agriculture based. Even if you are not a gardener, there are signs all around in northern hemisphere culture that these celestial dates are upon us.

The Months
The Lunar Cycle
Most pagan folk are familiar with Lunar Cycles as well, so not much I need to say here. The dates of several of the full-moons fall really, really closely to the days of the Wheel of the Year.

Pretty Close to Feb. 1st (Imbolc), could just celebrate on the "second full moon" after the Winter Solstice".


Similarly, pretty close to May 1st. Call is the "5th full moon after Winter Solstice".

Though the Wheel of the Year is a modern construct as we know it, I think there is much reason to believe that people just observing their natural surroundings, the rhythms of the natural cycles, would be capable of celebrating such markings. I'm not saying anybody was, as there is not historical evidence.

I am saying these cycles are obvious. Any animal institutionally has them encoded in their action of life. For how long have humans gone a step further to use these celestial cycles as markers. Markers for celebration, essential agricultural duties, a celestial lesson written by the intelligence of the cosmos, or just signs of hope.
Posted by scaston23 at 1:23 PM